Beyond the Bend Arch portfolio, Norris Industries has a full pipeline of potential future acquisition candidates in Texas and Montana, which ranges from exploration and production opportunities to technology and services companies where management sees an opportunity. Our management has ample deal flow and the intention to pursue a transformative acquisition. We expect to execute attractively priced deals in this environment, given that we have the advantage of an experienced management team, a relatively clean balance sheet, and that depressed oil prices have created a plethora of intriguing acquisition opportunities. Norris Industries has prospected the following projects: 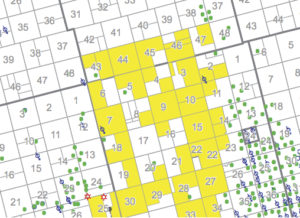 This Acquisition project has 2 properties with a combined six-month average production of 93 BOPD and 31 MCFPD on 10,360 net leasehold acres. These are produced out of Dean, Spraberry, Wolfcamp and Cline formations

This leasehold sits directly between three fields in which the Dean is a prolific vertical producer (Tex-Hamon, Sulphur Draw, and Ackerley). The area of interest is directly offset both up-dip and down-dip by more than one dozen wells that have produced greater than 100 MBO out of the Dean. Immediately offsetting sections 25-36 to the west are the Pitman #1 and the Kiefer #1, both of which produced over 250 MBO from the Dean. Conventional core analysis from four wells on or within four miles of the leasehold describes the Dean as generally a clean sand that has high porosity (7-12% or higher), is saturated with oil (20-40% or higher), shows prevalent vertical fracturing and has a gross thickness between 100 and 160 feet on the acreage in question. The potential for Dean development is substantial.

One operator drilled a 7,500’ lateral in July of 2014, which has produced 76 MBO and 46 MMCFG out of the Lower Spraberry. There are an additional 34 horizontal wells in northwestern Martin County less than 20 miles to the southwest that have been drilled since 2014. Available production data shows that many of these wells make between 14 MBO and 36 MBO in their best month (~400 BOPD – 1200 BOPD), confirming the potential for the Lower Spraberry here.

Several other zones have been tested horizontally in the area including Middle Spraberry, Wolfcamp A and B and Cline, reaffirming the potential for multi-zone exploitation and stacked laterals.

The Bend Arch Tiger exploration will target the Ellenburger formation expanding over 310 acres, also located in the historical Bend Arch/Ft. Worth Basin. This project has is an infield drilling package aimed at 4,700 feet highlighted by the Ellenburger and Jennings Sand pay zones as well as many others. At the present time, this project is under a very extensive study for horizontal drilling using a new, proprietary exploration technology that, management believes, can offer a substantial increase from the normal production in this field. Currently, there are producers drilled in 1983 with a very low and stable decline curve. IWP has access to injection well in this leasehold for the Bend Arch Lion 1A JV and has identified initial drilling locations to date.

The Guadalupe property is a good acquisition target. It has 65 wellbores on 1000 acres with 15 MBO in proven reserves in South Texas. Our goal is to significantly increase the current production of this lease using our new re-fracturing method.

We are doing very in-depth studies of this buyout opportunity including well control. This property has a prolific structure that contains a vast amount of commercial hydrocarbon production, having produced for over 20 years to date.